The air in dental surgeries has a variety of microbiological particulates and aerosols generated from ultrasonic scaler and high-speed drills. They vary in size from 0.5 to 5 microns in diameter and can remain airborne for many hours.

Dentists and their staff can easily inhale the viruses and bacteria contained within the aerosols, with facemasks offering no protection against this fine particulate pollution. Capturing these microorganisms reduces the risk of cross-infection – for the patient, the dentist and the team.

Dental Surgeries use chemical disinfectants to decontaminate hands, surfaces and instruments. While eliminating viruses, germs and fungal spores, disinfectants often contain toxic agents such as aldehydes (formaldehyde and glutaraldehyde) or phenol. Continuous low-level exposure to aldehydes can have negative health effects, such as breathing difficulties, memory impairment, eye and skin irritation and irregular heartbeat. Toxic compounds such as isopropanol, ethanol and n-propanol can also cause irritation of the respiratory tract and the mucous membranes.

Recent research studies have found that both dentists and their staff have a higher than average level of mercury in their body. Mercury is used in the amalgam for routine dental fillings. Mercury transforms from a solid to a gas at room temperature. The gas (which is the most easily absorbed type of mercury) can be inhaled when amalgam is placed in the mouth or removed. Mercury is highly toxic and humans should not be exposed to it.

With this news and patients becoming more health conscious, requests for amalgam removals by dental amalgamator are rising steadily. It is therefore now more important than ever, for dentists to protect themselves and their team from this harmful substance.

It is now commonplace for dentists to have air-conditioning systems installed. These installation systems are, however, often a source of contamination themselves, either because they are equipped with less then adequate filtration or because they are drawing in polluted air from outside without filtering it sufficiently. Indoor air contamination can be many times greater than external conditions, and dental air cleaning is required.

Prompted by an ever growing number of dentist offices as customers, Commercial Air Filtration specifies the IQAir Dental Series which has been developed to provide a flexible, cost effective, silent and low maintenance air cleaning solution for dental practices.

While dental hygienists have a wide variety of experiences with and opinions about dental air polisher-everything from loving it to hating it. Patients likely have similar opinions depending on the type of device used, the powders used, and the expertise of the clinician providing the air polishing. New advancements in this technology have some pleasant benefits for you and your patients. 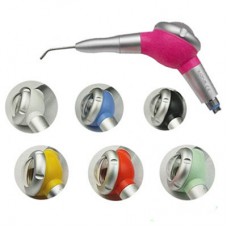 In fact, a study published in 2014 by the Journal of Periodontology concluded, “For exposed root surfaces, sodium bicarbonate cannot be recommended.” It revealed that even five-second exposure with air polishing devices using sodium bicarbonate powder showed considerable surface defects.

With the advent of air polishing devices designed for use with low-abrasive powders, dentists and dental hygienists can obliterate supra- and subgingival biofilm from enamel, exposed root surfaces, and restorative materials efficiently and comfortably.

Air polishing devices with sodium bicarbonate powders are effective stain and biofilm removal on enamel, and highly effective for biofilm removal in pits and fissures prior to sealant placement. But caution must be taken to avoid exposed root surfaces and most restorative materials, which limits their use on periodontal maintenance patients.

The Hu-Friedy/EMS Handy 3.0 Premium Package is new to the market this year. It includes the PERIO-FLOW handpiece with disposable subgingival tips that are flexible to adapt to deep periodontal pockets, and the PLUS handpiece, which removes biofilm supragingivally and up to 4 mm subgingivally. The Handy 3.0 Premium Package is a portable device that connects directly to the dental unit and uses low-abrasive powders such as glycine or erythritol and has two interchangeable dental handpieces.